Top 5 NBA Players in the community 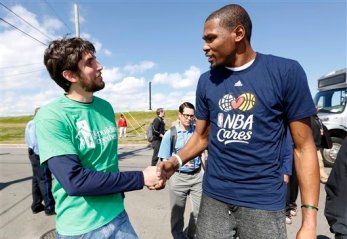 Jonathan Bachman/AP Images for Rebuilding Together

Kevin Durant, a NBA MVP and champion, does not back down from helping out in the community. Durant won the January Community Assist Award presented by Kaiser Permanente. He donated $3 million to the University of Texas basketball programs, $1 million in products to tornado/ disaster relief victims in Oklahoma City and giving $10,000 to a charity matching Collin Kaepernick’s “10 for 10” campaign.

“When I was young, playing basketball was one of the things that kept me out of trouble and kept me focused on my growth and maturity in to the man I would eventually become. For that reason, I’ve always wanted to play a leadership role in communities and neighborhoods – like the one I grew up in – and give kids a chance to choose health, teamwork and basketball over some of the other negative influences they may face. Thanks to Nike and many other supporters, the renovation and development of these basketball courts is the perfect opportunity to open these doors.” – Kevin Durant

Shane Battier and his wife Heidi believe in giving youth and young teens an opportunity at higher learning. They started The Battier Take Charge Foundation in order to help youth in the areas of Miami, Houston and Detroit. It is a four-year scholarship program that partners with Big Brothers Big Sisters of Miami, KIPP Academy in Houston and Horizons-Upward Bound.

“For me, it is about paying it forward. It is about unlocking the absolute special potential of kids who just need some support. It is about pushing your mind and reaching your dreams. And it all starts and ends with an education.” – Shane Battier 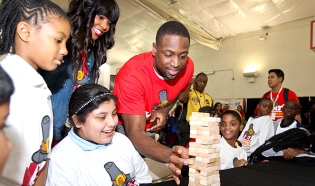 “I can’t just let basketball define who I am and what I am supposed to become… Like my mother always tells me, my life is bigger than basketball.”- Dwayne Wade 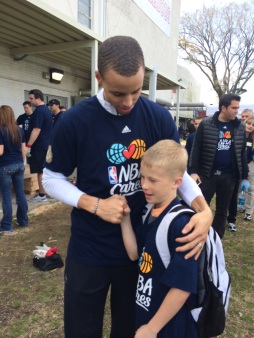 Stephen Curry is a two-time MVP, two-time NBA champion and holds the records for most 3-pointers made in a season. Curry was selected as the 2013-14 Season-long Kia Community Assist Award winner.  Curry helped distributed 38,000 bed nets in Tanzania during the 2013 off-season. This was part of his second annual “Three for Three Challenge,” which he donated three life-saving bed nets for every three-pointer he made during the 2013-14 season.

“Giving back to the community and those in need is something that has always been close to my heart and I am so grateful to have the opportunity to touch people’s lives and hopefully impact them in a positive way.” – Stephen Curry

The best player in the NBA just happens to be the best at giving back. Lebron James has started the “I promise” campaign, allowing 1,100 kids to go to college on a four-year scholarship. It will have taken about $41.8 million to spend every student to college.  James’s foundation spends at least $1 million every year to programs that help elementary students get interested in school, and provide young adults with college resources. In addition, James foundation has created multiple charities such as After-School All-Stars. Lebron James donated all of the proceeds from ESPN’s “The Decision,” which ended up being $2.5 million, to The Boys and Girls Clubs of America.

“You know, God gave me a gift to do other things besides play the game of basketball.” – Lebron James